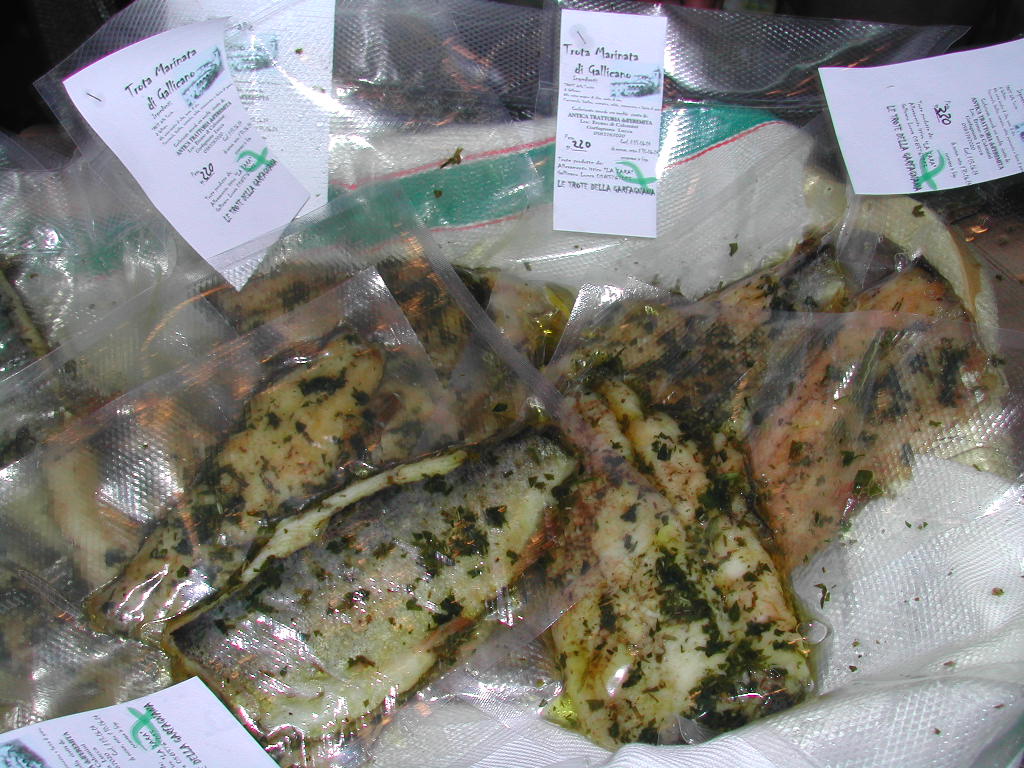 Category:
Products derived from fish, shellfish and crustaceans, and special farming techniques of the same;

3. Short product description:
Trota Marinata di Gallicano is gutted and the head and bones removed. Its light colour comes both from the natural colour of wild Garfagnana trout (the modern diet of farmed trout produces salmon-coloured flesh, so they are not used in traditional dishes) and from a light flouring and frying. The final product is a light-coloured fillet of trout immersed in a marinade of oil, vinegar and fresh herbs. Health wise, the dish is high in phosphorus and protein, low in cholesterol thanks to the extra virgin olive oil and has numerous digestive benefits from the aromatic herbs used in the marinade. The product does not undergo chemical processing, but is cooked over a low heat in olive oil and doesn’t contain preservatives. It’s vacuum-packed.

4. Production area:
It’s made in Garfagnana, particularly in the Municipality of Gallicano.

6. Production process:
After being gutted, the trout is left to rest at a temperature of between 0°C and 4°C for 8-12 hours. Its head and bones are then removed. The fillets are floured and fried in olive oil at a medium-to-low heat. Once cooked, they’re left to cool to room temperature or placed in a cool room. In the meantime, a pesto of fresh herbs – rosemary, parsley and basil – is prepared with garlic, chilli, salt and extra virgin olive oil. The cooled fillets are added to the marinade, making sure to fully immerse them in the oil.

7. Materials, equipment and premises used for production:
The trout is bred in the streams of Garfagnana in tanks that can be frequently flushed with water to stop excrement gathering on the bottom and the consequential increase of ammonia. Feeding is undertaken with continued veterinary control and rigorously certified and weighed feed. Natural feed (i.e. fresh fish or meat) is not used as it can transmit diseases, cause food imbalances and lead to the collection of organic materials on the base of the tanks, which would cause significant hygiene and health problems. Once caught, the fish are placed in small tanks, stunned, gutted and filleted.

8. Notes on traditionalism, homogeneity of spread and persistence of production rules over time:
This product is part of Garfagnana’s culinary tradition. In past centuries, the area was hard to reach with rugged terrain and limited daylight, which made it difficult to grow crops. As a result, the locals had to conserve their food, especially those grown in the brief summer. The abundance of clean and cold water in Garfagnana meant a great abundance of trout throughout the year. The marinade used arose not from a need to preserve the product on site, except on the rare occasion when large quantities of fish were caught after floods, but so as to transport the product during spring-summer to the plains where the high temperature of river waters did not allow for farms or the storage of this prized fish (i.e. in the lakes and tanks of the Lucchese villas).

It’s likely this recipe was prepared in centuries past with a proportion of oil and vinegar that favoured vinegar, considering how difficult it was to obtain oil, but we maintain that the right balance was important even to those past chefs who too often had to adapt to the conditions of the time. The spread of this method can be seen throughout the territory, even if in the last 30 years, trout has been frequently replaced with sea fish given its accessibility and the slight xenophobia that has always conditioned Garfagnana’s locals. Only in recent years have we started paying more attention to our resources and traditions. The production rules have remained the same and if anything, have been enhanced by a greater knowledge of health and hygiene regulations.

There are various historical references to this product:
The Turrite di Gallicano river has always been historically full of fish and was managed through secular fishing laws by the municipality until the end of 1940. The Municipality of Gallicano won the National Aquaculture Competition for its trout in 1907 (A. Rossetti, 1911).
Already in the 16th century, a notable quantity of trout was exported by the vicarage to the territory and city of Lucca, in particular. In the past, salt was very expensive and the most popular preservation method was marinating.
In the historical archives of the Municipality of Gallicano are manuscript acts that document the sale of marinated trout. Here is a selection of quotes from the “Regestum Gallicanense” (S. Paoli Puccetti, 1942):

9. Production:
150kg are produced annually. The product can be eaten in local restaurants.