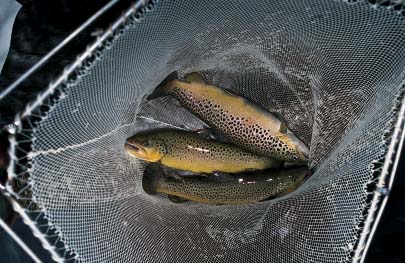 3. Short description:
The brown trout has a slim body that’s slightly squashed in at the sides. Its dorsal is a brown-grey colour with metallic gold hints on its sides and sometimes its belly, which is usually a white-cream colour. The dorsal and sides are characterised by red and red with black outlined spots. The skin also has pale stripes, which help camouflage the fish, and black opercular marks (located at the back of the head). The average size is between 200 and 300g.

6. Production process:
During the November-December period, the breeding specimens are fertilised. The fertilised eggs are incubated for the first two months in vertical vessels and from then until birth, in boxes or troughs. During the growth period, which last about two years, the fish are fed fishmeal. The adult trout are raised in large cement tanks. No specific hygiene practices are undertaken other than tank cleaning.

8. Notes on traditionalism, homogeneity of spread and persistence of production rules over time:
The traditional character of the brown trout is tied to the unique breed and microclimatic conditions (climate and water temperature) in which they live, as well as the farmers’ skill and production techniques, which have been honed over time. Their flavour is also unique, both delicate and decisive.

9. Production:
There is only one large farm in Casentino, which produces around 25-30 tonnes a year.