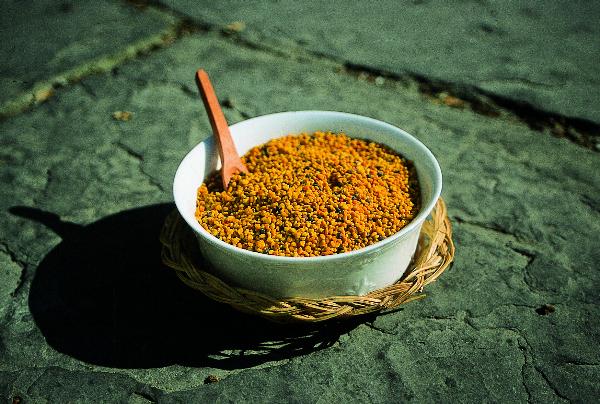 3. Short product description:
Tuscan pollen comes in various-sized grains in colours that vary from yellow to darker tones. It’s odourless and has a sweet flavour.

6. Production process:
During the pollen season – May to June – pollen traps are placed in front of hives. Once filled, the traps are taken to the extractor room and the pollen is manually extracted. It’s then dehumidified for at least an hour in ventilated ovens at a temperature of 40°C. It’s packaged in glass containers.

8. Notes on traditionalism, homogeneity of spread and persistence of production rules over time:
Compared to the past, pollen production methods have been refined and grid traps introduced for collection. The quality of the product is tied to the climate and territory – the blooms, pollination and absence of pollution. Pollen is eaten on its own or with honey or royal jelly.

9. Production:
Annual production of pollen is modest and around 3-4 tonnes. The product, together with royal jelly, is only a small facet in the production of honey – the principal product for all companies in the industry. The production of pollen is limited by high labour costs as it takes a long time to produce a modest quantity. It’s also not technically possible to increase the amount of pollen removed without causing problems in the hive. Pollen is sold exclusively in the area directly by producers to individuals. The Miele e salute festival, held in September-October in Montecatini showcases an entire range of bee products.