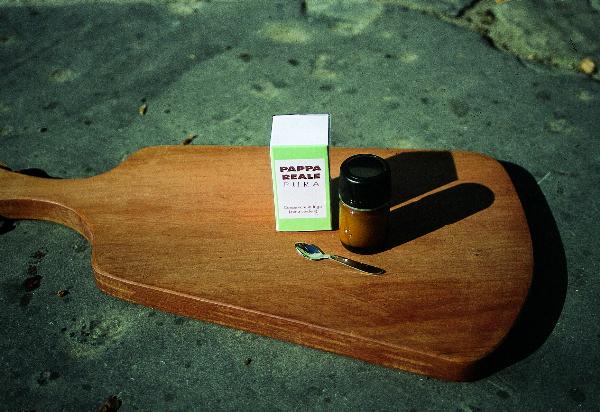 3. Short product description:
Pappa reale (royal jelly) has a thick and creamy texture and whitish colour. It’s odourless, but has a bitter flavour. It’s packaged in 10g jars, is perishable and should be stored in the fridge and eaten within 10 days.

4. Production area:
It’s made throughout Tuscany.

6. Production process:
Royal jelly is made during the months of May, June and July in the so-called “queen cells” inside the hive. The “queen cells” are collected and transported to the extractor room where the larvae are removed with a spoon and the royal jelly is extracted with a special vacuum. It’s then packaged in glass jars and stored in a fridge.

8. Notes on traditionalism, homogeneity of spread and persistence of production rules over time:
A health food with rich restorative properties, royal jelly has experienced an increase in consumption in recent years. It goes well with honey and alcohol, but can eaten on its own.

9. Production:
The official 1999 Tuscan census shows there were 2,223 active beekeepers with a total of 84,323 reported hives. However, this data doesn’t reflect the reality, which is estimated to be more like 110,000 hives. Royal jelly producers in Tuscany are gathered in associations. Production is modest (a few kilos a year) and is just one facet in the production of honey – the primary product for all companies in the industry. The production of royal jelly is limited by high labour costs as it takes a long time to produce a modest quantity. The product also suffers from stiff competition from China, which markets its royal jelly at a lower price. Tuscan royal jelly is sold entirely in the area and directly to individuals. Among the events dedicated to royal jelly, the highlight is the Miele e salute festival, held annually in Montecatini in September-October.