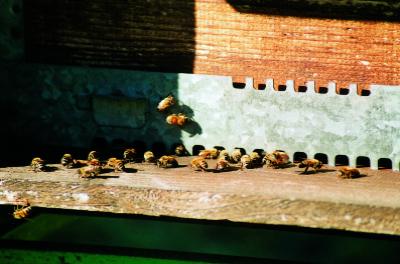 3. Short product description:
This product is packaged in wax cells in an acorn shape and contains 250g to 350g of royal jelly. It has an ivory white colour with different shades depending on the yellow tone of the wax. It smells like its wax casing, but the flavour is bitter and the texture thick and creamy. It’s a perishable product and must be kept in the fridge and eaten within 10 days.

6. Production process:
A special beekeeping method called “orfanizzazione” is used to produce this royal jelly. This involves the division of the family (special wooden boxes divided into several compartments are used), so the orphaned bees raise a new queen and produce royal jelly. As royal jelly is only made by the youngest bees, new specimens are introduced every 10 days. The 10-15 hour-old larvae are extracted from the frames and stowed in wax cells. The cells are placed in a special frame and then inserted into the orphan compartments of the box. The family is fed honey or sugar syrup. After 72 hours, the frame is extracted and taken to the extractor room where the larvae are removed and the product packaged in cells. The product keeps better when stored in a controlled cool room.

8. Notes on traditionalism, homogeneity of spread and persistence of production rules over time:
The wax cell packaging gives this product its unique character and contributes to its aroma and flavour.
Its production follows market demand. Usually cells are supplied in cycles of at least 30 days. Royal jelly is used to fight symptoms of fatigue or as a supplement during periods of intense physical or metal exertion. Production runs from the end of April to the middle of September.

9. Production:
The annual production of pappa reale in cellette is estimated to be on average 3.5-4kg. The product is primarily sold direct by the producer.