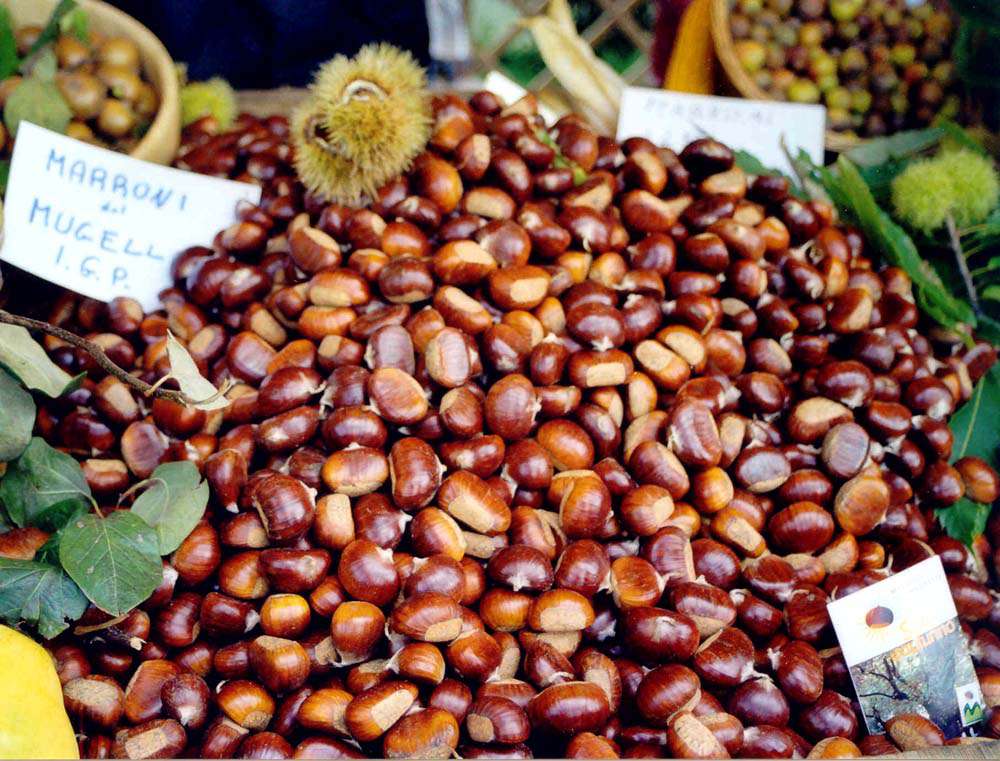 The cultivation of chestnuts in the Mugello zone reaches back to Roman times, but starting from the Middle Ages numerous documents and certain information have been available regarding the spread and importance of this crop, and with particular reference to “marroni” chestnuts. The centuries-old chestnut trees in the area were, until the end of the 1950s, an important and irreplaceable source of nutrition and income for the local population, in fact the chestnut tree was called the “tree of bread”. After a 30-year period of considerable decline, when there was a marked loss of population in the mountain areas, modification in alimentary habits and the appearance and spread of a cortical blight that drastically reduced the amount of surface area dedicated to chestnut forests, since the 1980s this sector has undergone recovery.
The Marrone del Mugello is produced in chestnut forests belonging to a series of local ecotypes that can all be traced back to the Marrone Fiorentino variety. The forests, which cover a total area of 3,322 ha, are located in an elevation band that ranges from 300 to 900 metres above sea level with a maximum density of 120-160 plants/ha. During the productive phase, neither plant protection products nor fertilisers are employed; likewise, chemical treatments or additives are forbidden for product preservation. In order to keep the product better, the chestnuts may be treated with a cold-water bath, which may also be preceded by a hot-water bath. Fresh Marroni del Mugello in their shells are characterised by their medium-large size (not more than 80 fruits/kg), prevalently ellipsoidal shape, a slightly protruding apex with tomentum, one side tends to be flat while the other is convex, the scar at the base is rectangular and generally flat and the colour is lighter compared to the pericarp. The pericarp, which can easily be detached from the testa, is thin, reddish brown with 25-30 dark streaks that are in a meridian direction. The seed, generally one per fruit, has white pulp that is crunchy with a pleasantly sweet taste and its surface is almost completely without furrowing. Maximum quality and notoriety are attained with the “Marron Buono di Marradi”; Italian varieties are also greatly appreciated: Carpinese, Fragonese, Cecio, Montanina and Reggiolana.