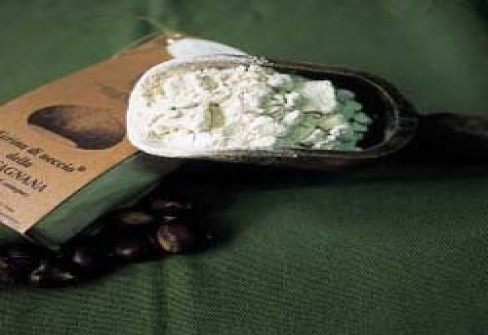 The word “neccio” in the Garfagnana zone means “chestnut” and it is of ancient origin. The cultivation of chestnuts in Garfagnana began around 1000 A.D. when, to face the growing increase in population, large areas were cultivated that had previously been uncultivated, and thus the chestnut became known as the tree of bread. The cultivation of chestnuts in the area of Lucca spread, thanks also to the grafting of the most suitable cultivars for the production of flour, and so much so that soon in Garfagnana chestnuts became the main source of nutrition for the population.
The drying of chestnuts is historically carried out in ‘metati’, drying houses specifically for chestnuts. Today, these ‘metati’ are generally spread throughout chestnut forests and are constructed in masonry, have varying sizes and are divided into an upper part above a sort of floor created with wooden slats placed close together (this is called the ‘canniccio’) where the chestnuts are spread and below a slow-burning, chestnut-wood flameless fire. For about 40 days the smoke passes up through the chestnuts and dries them slowly, preparing them to be hulled and ground. In the Garfagnana area, up until the 1950s, there were more than 7000 ‘metati’ and about 250 mills for grinding dried chestnuts into flour.
In Garfagnana about 5000 ha are involved in the cultivation of chestnuts, in an elevation band that stretches from the valley floor up to 900 metres above sea level, on acidic or sub-acidic soils. The following varieties are grown: Carpinese, Pontecosi, Mazzangaia, Pelosora, Rossola, Verdora, Nerona and Capannaccia; all suitable for transformation into flour and each of them conferring particular characteristics of taste and flavour. The maximum production permitted by the discipline is 3500 kg/ha.
Farina di Neccio della Garfagana has a fine texture, both to the touch and palate, its colour can vary from white to dark ivory and it has a typical chestnut fragrance. Among the traditional recipes: polenta made with Farina di Neccio, ‘manafregoli’ (Farina di Neccio cooked in milk), ‘castagnaccio’ (a flat cake made with Farina di Neccio, olive oil, walnuts and pine nuts), and finally that which is considered the bread of Garfagnana, called ‘neccio’, made from Farina di Neccio, water and salt.