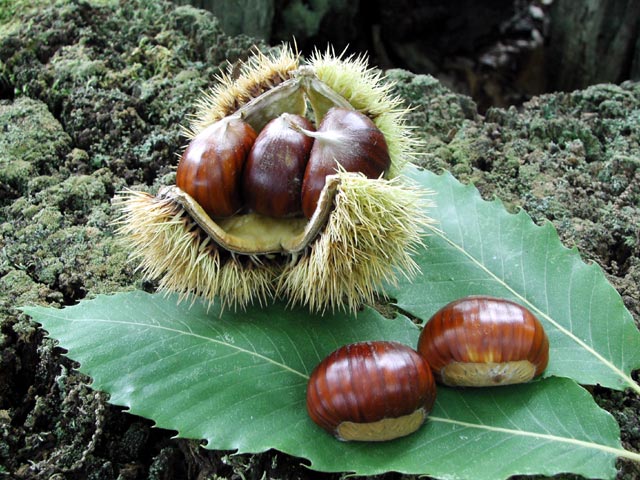 The cultivation of chestnuts has always been present in the Amiata area thanks to the particularly favourable pedologic and climatic conditions. As early as the 14th century, the statutes of the Amiata community laid down rigid rules for the protection and exploitation of chestnut resources, both with regard to the harvesting of fruits and the production of wood. The statutes prohibited damage to and cutting of standing green and dry plants, imposing very costly pecuniary sanctions on violators; the harvesting of chestnuts was limited to precise dates, allowing for a period for harvest only by the owner of the chestnut forest and a later period for harvest by others (this latter period stretched as far as Carnival, permitting everyone, even the poorest of people, to find a minimal amount of sustenance).
Cultivation of chestnut in the Monte Amiata area occurs between 350 and 1000 metres of elevation on soils derived from decaying acidic volcanic rocks: these optimal environmental conditions confer on the product particular organoleptic characteristics. During the productive phase, neither synthesised fertilisers nor plant protection products may be utilised and the harvest, which takes place from mid-September to mid-November, must be carried out by hand or with mechanical methods which are suitable to product protection. The maximum productions per plant and per hectare, according to the discipline, are 12 kg and 1800 kg, respectively. Chestnuts may be preserved using various methods: treatment in cold water for a maximum of seven days, sterilisation with hot water bath treatment and then in cold water, or by freezing, but never through the use of additives or other substances.
The chestnut varieties allowed for the production of Castagna del Monte Amiata PGI are: marrone, bastarda rossa and cecio; however to be offered to consumers the fruits must belong to only one of the three varieties with mixing of different lots of several varieties absolutely prohibited. The minimum size allowed is equal to 80 chestnuts per net kilogram fresh weight and the product is marketed in net packages for alimentary use.
Chestnuts are the protagonists in many typical local recipes such as ‘castagnaccio’, ‘i necci’ and polenta. “…it is the favourite, and most economical, food for the People, and it is so nutritious that those who perform the most difficult jobs of sawing, chopping and hoeing live on nothing more than polenta and water, or as people jokingly say here, bread made from wood and wine made from the clouds…” Viaggio al Monte Amiata (G. Santi, 1795).