The Pisan Romanesque in Valdera and Val di Cecina

A journey through the beauty of Pisa’s Romanesque style, in the areas of Palaia, Pecccioli, Lajatico and Volterra 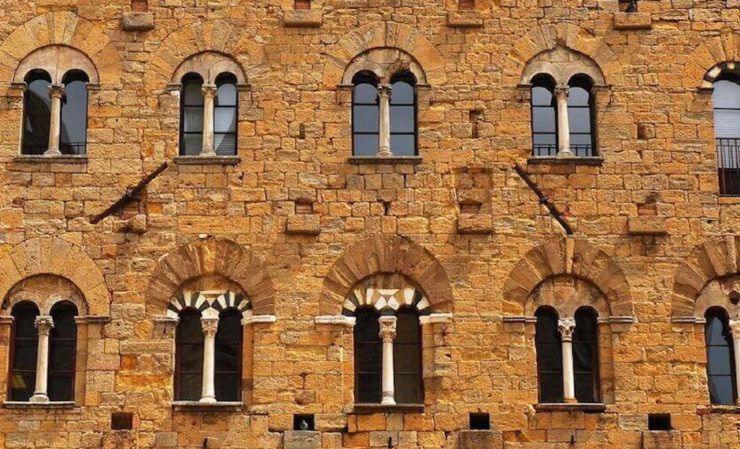 In the fifty kilometres that separate Volterra from the hilltown of Palaia, one finds numerous examples of the Pisan Romanesque which developed around the eleventh and twelfth centuries. With its blind arches and its lozenges, so evident in the Cathedral and other churches of the historic centre, the Pisan Romanesque came to colonise all Tuscany. With this in mind, we suggest an itinerary that will take you through Valdera and Val di Cecina, starting in Palaia and finishing at Volterra.

We begin the journey with a visit to the parish church of San Martino in Palaia, founded in 1280 and probably designed by Andrea Pisano, who also made the bronze south doors of the Baptistery of San Giovanni in Florence. The three internal naves, separated by round arches, acquired a stoup in the twelfth century and a baptismal font in hexagonal form. After this introduction, you head towards Peccioli, where the parish church of San Verano awaits you with its striking blind arches in an unfinished façade, embellished only by the distinctive Romanesque lozenges. The most interesting artwork inside this church was an oil-and-egg-tempera panel painting, now found in the Pinacoteca di Brera, depicting San Verano between two angels and six scenes of his life. You can, however, still admire the canvasses of Jacopo Vignali in the chapel dell’Assunta.

Now go west for about ten kilometres and you will find a complex of spare, simple beauty, the Abbey of Morrona in the municipality of Terricciola, where even today you can breathe the peace of the monastic life. The church, apart from a few modifications, has maintained its Romanesque credentials with a single nave which opens halfway down into two lateral naves, articulated over two aisles so as almost to form a transept. After pausing here, turn south towards Val di Cecina and after thirty kilometres you will come to Volterra, a town whose many architectural strata include a notable layer of Romanesque. In Piazza dei Priori, for example, there stands a singular, secular example of the style: the thirteenth century town hall designed by Riccardo da Como and built at the behest of Ildebrando Pannocchieschi. Despite numerous transformations, the windows on the second and third floors have retained their original Romanesque round arches.