An itinerary that celebrates the beauty of Upper Val di Cecina with some trekking routes through the area, from Montecatini Val di Cecina to Volterra 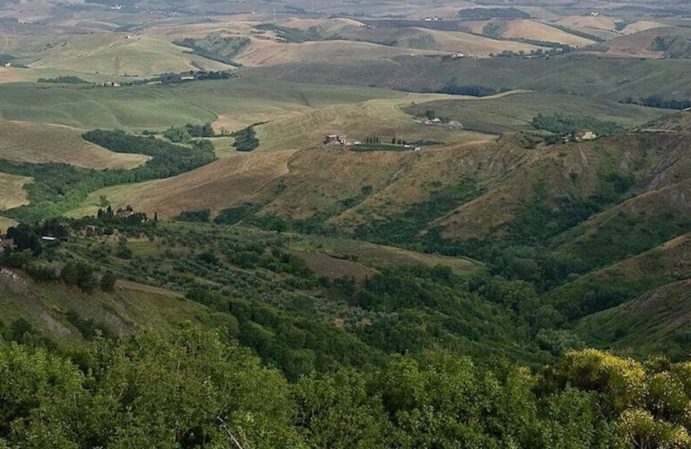 The greenery of upper Val di Cecina is the ideal backdrop to trekking holidays, cycling trips or horse rides. There are numerous itineraries to follow between the municipalities of Montecatini Val di Cecina and Monteverdi Marittimo, and even more places of interest to stop at, like the Balze di Volterra and the geothermal phenomenon of Sasso Pisano.

Our itinerary starts at the Mining Museum in Montecatini Val di Cecina, a mysterious place where miners spent centuries digging to exploit the rich copper seams. From here, fifteen kilometres on the B-roads will take us to Volterra, a city of immeasurable importance to art historians, in its breathtaking natural context. Apart from admiring some examples of the Pisan Romanesque, the Etruscan city gates, the circuit of walls or the remains of the Roman theatre, you will be surprised by the morphology of the Volterran hill, as its steep rock walls and plunging ravines charge the landscape with a harsh beauty.

Thirteen kilometres south of Volterra you will find yourself in a green expanse, criss-crossed with a thick network of paths. This is the Nature Reserve of Beriglione-Tatti, and wolves, badgers, wild boar and martens live in its dense Mediterranean shrub; while a large number of birds of prey, including hawks and sparrowhawks, favour this, the heart of Tuscany, as a nesting ground. At the southern edge of the reserve it is worth pausing at Masso delle Fanciulle, a picturesque, swimmable stretch of the river Cecina. After a long and demanding walk, a dip in this oasis is perhaps exactly what’s required.

For the last leg of the trek, before reaching the distinctive hilltown of Montecastelli Pisano, we cross the Pavone Valley, with its wild woodland and its jutting ophiolite rocks shelves. With mines and natural caves on either side, there rises a hill topped with the twelfth-century Fort Sillana, the view of which amply rewards the steep climb to get there. A few kilometres further, we finish the journey at Montecastelli Pisano, a little town of some 200 souls in which time seems to run more slowly than normal. Rings of stone houses surround, as if in defence, the tower-fortress of the Pannocchieschi and the parish church of San Jacopo and San Filippo. Not far from Montecastelli, one cannot pass up a visit to the Buca delle Fate, where you will find an Etruscan tomb from the sixth century B.C.