Over the years he cooked for Totò, the Kennedy family and King Gustaf of Sweden

A long, long career behind the stove, the drive to bring his city’s cuisine to the whole world, and the inspiration to found the Association of Florentine cooks: this is why he earned the respect of all his peers and the title of leading Florentine chef. Eliseo Guidetti died today at the age of 91, and with him goes one of the most important figures in the city’s gastronomic landscape.

His adventures in the kitchen began in 1949 at the Grand Hotel in Florence, alongside chefs like Renato Ramponi and Giovanni Gallina. With them he created the first Association of Florentine Cooks, with links to the Association of Northern Cooks, based in Milan. Not long after that he had marshalled his colleagues across Tuscany to put together the Tuscan Regional Union of Cooks, of which he remained a member for many years, simultaneously laying the foundations for the Italian Federation of Chefs.

As chef at the restaurant in the Grand Hotel, Guidetti had the chance to meet and serve the great and the good of the time, such as Totò, and also be present at the birth of the first fashion shows in Florence. He was later headhunted across the city to work in Harry’s Bar, which at the time was located in via del Parione. “I remember President Kennedy’s mother,” he was fond of saying, “who, as a true American, enjoyed trying my taglierini al prosciutto, a dish still on the menu at Harry’s Bar, while sipping whisky.” In later years he found himself in Stockholm as an ambassador for the Tuscan Region, where he made a typical Tuscan lunch for 650 diners, not least the Swedish King Gustaf, in the Nobel Prize award room. The flag-wavers were accompanied by the sound of Florentine guitars.

“My colleagues and I are deeply saddened,” said Massimiliano Catizzone, president of the Association of Florentine Cooks, “by the loss of our beloved honorary president. His kindness and humanity, along with all that he accomplished over the years, will never be forgotten by anyone who ever had the good fortune to meet him. On behalf of the whole association, we send our heartfelt condolences to his daughter Giusi and his other relations. We know that Eliseo will continue to follow our progress from the stars.”

Guidetti’s funeral was held on Saturday 23 May 2020 at 10am in the church of Sant’Angelo a Legnaia, in via Pisana. 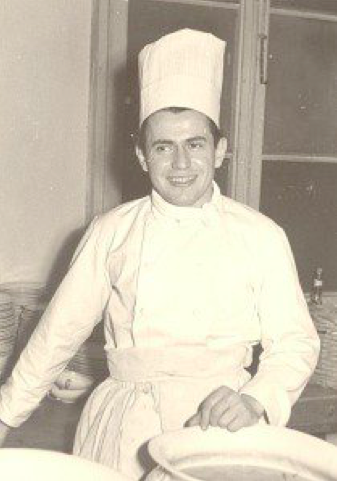