The soup from Aquilea, a hamlet in the Lucca municipality, has become part of the traditional Tuscan food products in the recipes section. This recognition, obtained with the regional decree of January 2019, pairs with another important title. On November 26, Aquilea was awarded with the title “Paese della Zuppa” (“Town of Soup” thanks to a decision made by the board. The procedure is currently underway to receive the “STG (Specialità Tipica Garantita)” recognition from the Italian Ministry for Agricultural Policies.

All this confirms the ongoing commitment demonstrated by the Aquilea Town Committee, which aims to keep local traditions alive while also promoting initiatives (such as the Soup Festival, which has taken place every August since 1978) to improve the quality of life of the townsfolk, especially the younger generation.

Aquilea soup is made according to a traditional recipe, which includes the use of the  lucchese red bean, Lucca black curly cabbage (braschetta lucchese) and freshly picked seasonal herbs. The tradition behind Aquilea Soup dates back to the 12th century: the ancients called it the long-life elixir and its ingredients have been deemed as anti-ageing and a boon against degenerative diseases.

Aquilea: a bit of history

Aquilea was settled in the pre-Roman age. The name seems to be linked with the name Aquilius, hence the meaning of the “country” or “farmstead” of Aquilius. Aquilea is remembered in a document in the Lucca State Archive as well as in two other parchments dating to 1125, in which the bishop purchased assets in Aquilea. The name of Aquilea also appears in a document dated 7 March, 1158, in which a certain Guglielmo del fu Moretto, and his wife sold some land and houses in Aquilea to the priest of S. Maria della Rocca di Mozzano.

The tradition behind Aquilea Soup begins around the year 1100 with the settlement of San Leonardo in the higher part of the hill, later called by Castellaccio where he created a community and a small castle. The Aquilea area is all in the hills; in the Middle Ages the Serchio River wasn’t managed like it is now, so the entire plain was subject to flooding. The hills were the only place where subsistence farming could happen and this soup was a daily staple. Farmers ate what nature made available to them, boiling everything altogether, especially in the winter.

Aquilea Soup has seven characteristics due to its distinctive recipe: “Removes the hunger and lessens the thirst; fills the stomach; cleans the teeth; makes you sleep, digest, and reddens the cheeks”.

The dish was (and still is) served on Fridays, as a vigil and to use the leftover bread, given that Saturday was when the week’s bread was baked. The best time to make soup runs from the early winter to early spring because the “herbs” and especially the “braschetta lucchese” cabbage gain their best flavour with the frost.

The ingredients are primarily local ones: red beans from Lucca, black curly cabbage from Lucca, oil from Aquilea and the knowing proportions of wild herbs that vary with the seasons (the full list features about 60 wild herbs). The product isn’t labelled and sold, but is served during events organized by the town committee in Aquilea and at other events they have been invited to attend.

Here you can find a full list of local herbs from Lucca. 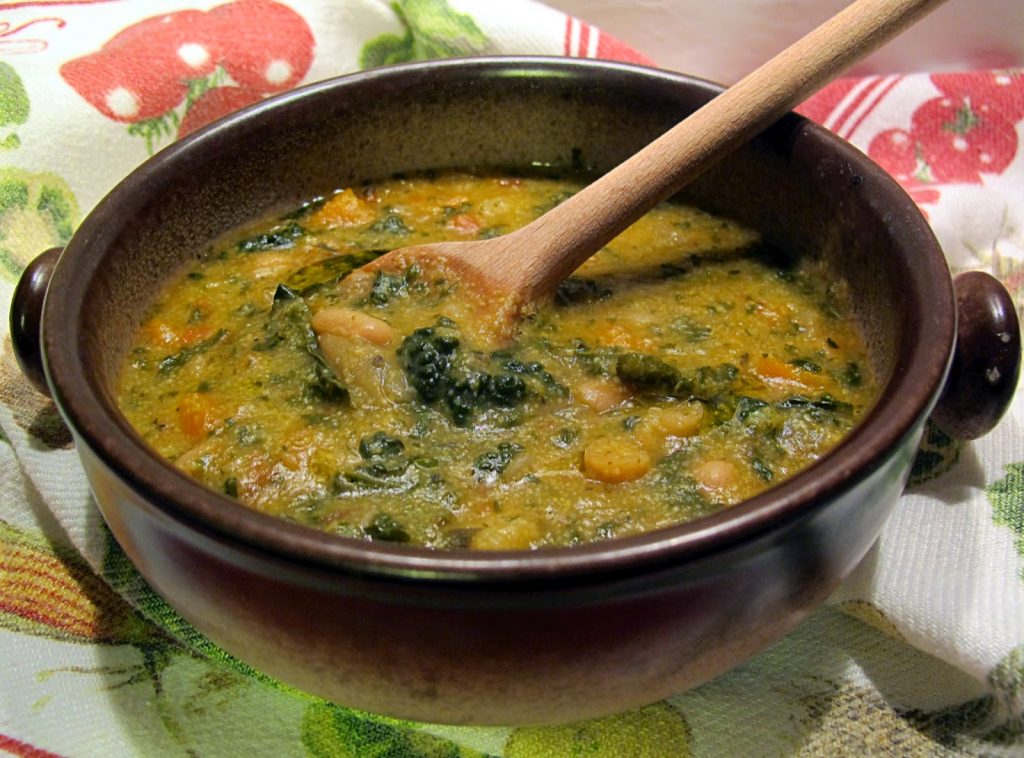